An Interview with Olympian Kelly Hurley on Med School Minutes 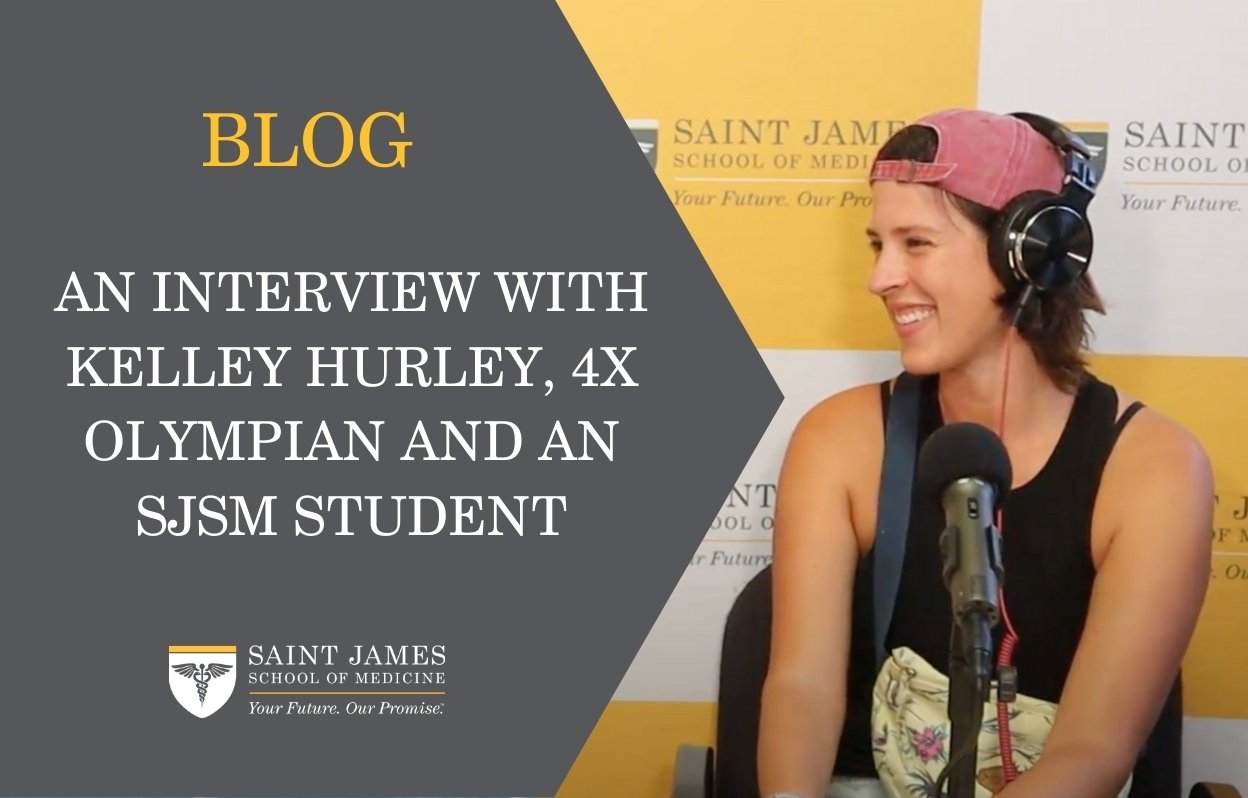 On our most recent episode of Med School Minutes, we had the distinct pleasure of speaking with famed Olympian, Kelly Hurley as she makes the transition to life at Saint James School of Medicine on the beautiful island of Anguilla. We should start by saying Kelly is a 4-time All-American athlete who has competed in fencing since she was 17 years old. She was the only woman epee fencer from the United States to qualify for the Olympic Team in 2008. She is a four-time Olympian competing in 2008, 2012, 2016, and 2020 Olympic Games. Kelly brought home the bronze medal for team fencing at the 2012 London Summer Games and is a graduate of the University of Notre Dame in 2010.

One of the more exciting things about Kelly is that she started at SJSM online first. She only recently made a move to Anguilla to join campus life. When she did move, she was joined by her two dogs, two cats, and boyfriend to set their roots on the island. While most of us on the outside would consider the Olympic career to be the most impressive, Kelly is also a 3-time World Champion.

The Training of a Champion

It was surprising to learn how much time Kelly spent training. Like many medical students, her world revolved around perfecting her skills. That included eating healthy, sticking to a schedule, and balancing her other pursuits so the stress never became overwhelming or got in the way of her success.

When you dedicate 8-13 hours a day to a single subject, you begin developing incredible resiliency that requires help from outside sources to push you to even higher achievements. This is a common theme in medicine where peers, unique cases, and mentors sometimes push the students at SJSM because they know you have more potential than you may be showing.

Kelly participated in the 2020 Summer Games in Tokyo, but these actually occurred in 2021. This was in the middle of the global pandemic. While most students at SJSM saw Covid from the perspective of local volunteering or in-depth research, Kelly was exposed to a unique experience of a bubble created by the Japanese and IOC governments.

This meant a lot more testing, controlled movements, and restrictions to the Olympic Village while participating. She would see people who had spent the same amount of time she did building up to this moment suddenly test positive and be taken away right when they reach one of the highest echelons of their sporting performance.

Luckily, she was able to do a bit of traveling after the games and saw more of the world before returning home and pursuing her academic career. It certainly helps that Kelly’s dad is also a fencer and a doctor.

From One Discipline to Another

As many students at SJSM understand, the amount of time, energy, and resources that must be dedicated to studying often contribute to many people giving up on their dreams of being a doctor. That is why Kelly has a slight advantage in this area. She spent so many years committed to a singular pursuit that now that same level of energy can be shifted to medical studies.

When we had the pleasure of speaking with Kelly, she was in between her third and fourth semesters. She spoke a bit about finding the motivation and determination to overcome the challenges of studies. Even if you face a couple of bad scores, that shouldn’t mean you trip into a downward spiral of depression and lose your overall goal. Instead, you must find that underlying reason for being a student and dig deep to pull yourself back up. Dwelling on mistakes will not help in the long run.

Kelly was kind enough to offer a solid bit of advice, including setting a strong reason for you being at SJSM. This will be your foundation and driving force for moving forward. It will be your measurement to know where your limits lay and how you can develop a genuine love and appreciation of medicine. She knows from her dad how challenging things will get in the future and believes strongly in the power of resolve.

We just want to say a special thank you to Kelly for coming on to the Med School Minutes Podcast and offering some of her incredible experience and insight. The comparisons she made between fencing and medicine were surprisingly beneficial and worth taking a listen to for anyone out there thinking of a medical career. We wish nothing but the best for Kelly and if you see her around campus, be sure to let her know you heard her on Med School Minutes at SJSM!