EFFECT OF SUPPORT ANIMALS ON STUDENTS 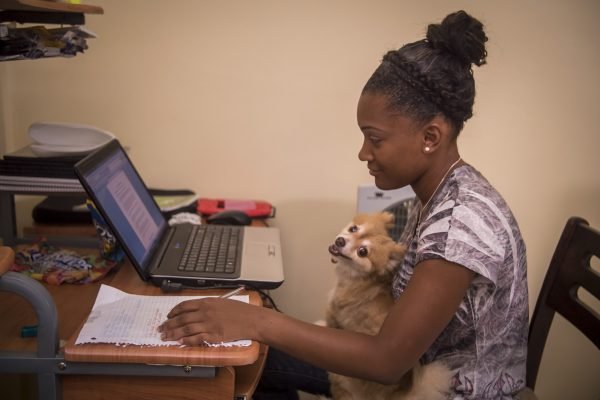 Pets have the innate ability to brighten your mood, even during the worst days. Their comforting companionship has been utilized by hospitals for years, bringing happiness and joy to a variety of patients and senior living communities to boost morale. Simply snuggling next to the patient or just being present brings comfort and peace knowing they are not alone.

With life going virtual and interactions with everyday people limited in response to the ongoing pandemic, there is a sense of loneliness and depression stemming from the isolation of others. As social beings, it is in our nature to seek out interactions and connections with other people.

In years past, society was reluctant to openly discuss mental health matters, but as we have progressed, the taboo has diminished and we have become conscious about how to improve upon our mental health during the darkest times. Students have reported anxiety, depression, and stress about relationships and academic performance within the traditional school environment – those have since heightened in response to online classes and the lack of social interaction. According to a study conducted by Active Minds, 80% of students have reported that COVID-19 has negatively affected their mental health, and 1 in 5 college students say their pre-existing conditions have significantly worsened throughout the pandemic.

To combat the nearly 5 percent of adults (18 or older) that are experiencing a mental illness in any one year, equivalent to 43.8 million people, psychologists have been turning to emotional support animals to improve upon an individual’s psychological state. Simply being able to see or talk to the person next to you can have a positive impact. The use of emotional support animals has been shown to lower stress levels and reduce an individual’s anxiety. As well as providing comfort, they can prevent an individual from feeling isolated and lonely, especially when they have been confined to their homes or restricted spaces.

According to the American Society for the Prevention of Cruelty to Animals (ASPCA), approximately 6.5 million companion animals enter U.S. animal shelters nationwide every year, approximately 3.3 million of which are dogs. As a result of the stay-at-home order in March,  the demand for animal adoption skyrocketed! During the second half of March, animal welfare organizations across the country saw a spike in adoptions, with an estimated national adoption rate of 58% at the beginning of the month, jumping to 85% by the end of the month.

While the stay-at-home order brought with it a sense of isolation and anxiety of what the future has in store, people have turned to their pets for companionship and support. Rachael Silverman, a psychologist specializing in family psychology who often prescribes emotional support animals for patients, was quoted in a New York Times article saying, “The emotional support that pets can offer their owners is more crucial than ever in this moment. With so much uncertainty and instability, animals provide people, with unconditional love, support, and comfort as well as serve as a distraction.”

It is important to note that the laws pertaining to emotional support animals are different from those governing disability service animals since they are not held to the same requirements. A service animal falls under the Americans with Disabilities Act and are usually dogs that are trained to do work or perform tasks that help individuals with a physical, sensory, psychiatric or intellectual disability. Emotional support animals, on the other hand, are not trained in specific tasks and therefore are not recognized under the ADA.